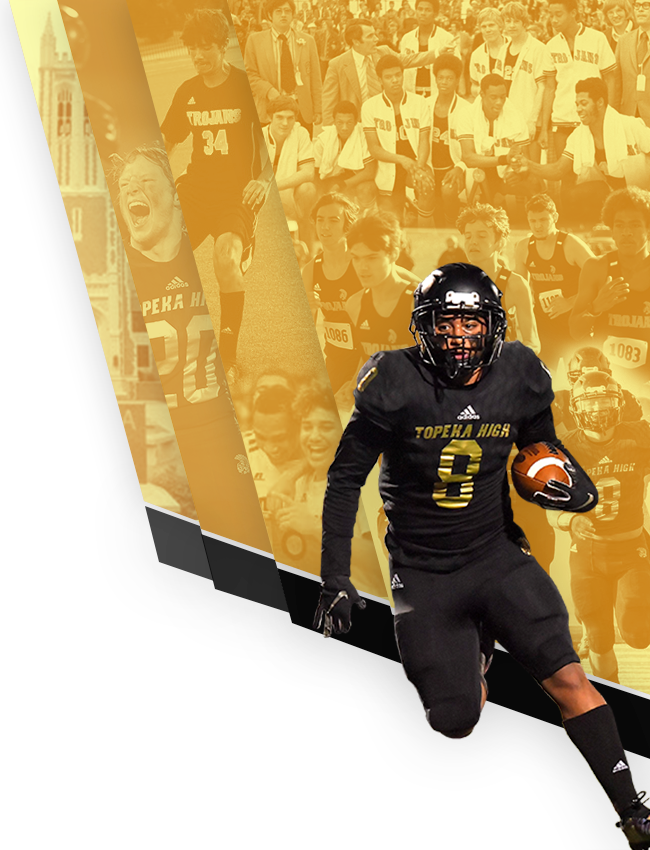 Coming off an extended basketball season that saw her Topeka High team advance to the Class 6A state championship game, NiJaree Canady has taken a little longer than usual to fully get into her softball groove.

“As soon as state basketball was over, my team was already practicing so I had a lot to catch up on,” said Canady, the pitching ace for the Trojan softball team. “It’s taken about three weeks.”

Even after Tuesday’s performance in High’s eye-opening 5-0, 10-0 sweep of Washburn Rural on the Junior Blues’ home field, High coach Shane Miles said Canady isn’t fully where she can be. Which is a scary assessment given how Canady overpowered Rural on Tuesday.

After giving up back-to-back singles to the first two batters she faced, Canady completely locked up the Junior Blues. The junior allowed just three more hits in the doubleheader and struck out 28, leading the Trojans to a huge sweep.

“There’s always room for improvement,” Canady said. “I felt good out there and coming here and getting a win is always good. We knew coming here it would be good games and we had some good practices yesterday. It gives us a lot of confidence.”

Now 10-0 on the season with sweeps of Rural, Seaman and Manhattan in addition to a non-league sweep of Shawnee Heights, High should be brimming with confidence. The Trojans are in strong position to win a rare Centennial League championship.

And the way they swept Rural should also be a boost for the Trojans. It wasn’t just Canady’s dominance in the circle that got it done for High, it was contribution up and down the lineup.

“We got production from everybody today,” Miles said. “Everybody got bunts down, we got situational stuff, we got big hits.”

Perhaps the biggest of those hits came from junior Elycia Joyce. Overshadowed a bit by the torrid start from teammate Zoe Caryl — who stayed hot in the sweep with two home runs — junior Elycia Joyce had been swinging a hot bat as well, hitting .476 coming into Tuesday’s doubleheader.

But she’d yet to really break out like she thought she could. A power hitter for much of her youth career, Joyce had yet to collect her first home run of the season, several coming close on the deep fences at Hummer Sports Park.

Wait no more. Joyce delivered the biggest blow of the 5-0 first-game win, smacking a three-run home run in a four-run third inning that put the Trojans in control. She added a second home run in the nightcap, a two-run shot that was one of four the Trojans hit in a six-run sixth inning that finished off the 10-0 win.

“I was feeling good and I had a 3-1 count so I thought she’d throw me right down the middle and she did,” Joyce said of her three-run homer off Rural ace Olivia Bruno. “I was looking for it and I took it.

“Seeing these people like Zoe leading us with six home runs this season, I want to do that. I want to get as many home runs as I can.”

The long ball got contagious for High in the second game with High already up 4-0 after scoring four times in the fourth with Zoie Kincade and Canady each getting RBI singles and Caryl a two-run single. Caryl started the barrage with her sixth home run of the season and Canady followed with a solo shot of her own.

Three batters later, Joyce slammed her second shot of the doubleheader and Tatum Wilson followed with her own solo homer.

The production was more than enough for Canady, who worked out of her first-inning jam in the opener with three straights strikeouts following the leadoff singles from Campbell Bagshaw and Bruno. Canady struck out seven straight batters and finished with 17 in the three-hit shutout.

She then fanned 11 in the second game, escaping a two-on, one-out situation in the fourth and a two-on, two-out jam in the fifth, striking out Bagshaw to end that threat. Rural managed just five hits in the two games, its first game action in two weeks and just the Junior Blues’ second doubleheader of the season.

“I think it played some difference in the fact that we haven’t seen a lot of live pitching having only played two games,” Rural coach Tricia Vogel said. “They’re halfway through their season. But I’m not going to make any excuses for it. We have to come out and play better and they played well and hit the ball well. We didn’t hit our spots pitching or make adjustments at the plate and they did.”

Vogel said the lost opportunity in the first inning of the first game somewhat set the tone for the doubleheader on Rural’s end.

“We didn’t really have a lot of energy and that moment kind of deflated any energy we did have to start with,” Vogel said. “It’s hard when you don’t have any energy to start with and you’re reaching for any little thing. We just couldn’t find anything to get some energy in our dugout, in our at-bats so we let them take over the game.”

Things don’t get any easier for the Junior Blues (2-2) this week, traveling to Shawnee for four games (two Friday, two Saturday). Rural’s next game is against two-time reigning Class 6A state champion Free State on Friday and the Junior Blues will also face Olathe West, Olathe South and Olathe Northwest at the tournament.

“We talked about this is a really tough week for us,” Vogel said. “It’s going to show us where we’re at and where we want to be at the end of the season and what do we need to work on and improve to get there. If we don’t make those changes now, it could be a disheartening end. It’s going to be a good test for us.”